We’re back, obviously or I wouldn’t be posting. Tiana did great, and is happy to be home healing where she’s most comfortable. I don’t think the cat has left her lap since she parked herself on the couch.

I got home from the hospital Tuesday night and saw that Amaunet had shed. She didn’t get it all off on her own again, so she had to soak for awhile in the bath, but now she looks all pretty in her shiny new skin.

I promised you some updated pictures after her shed, so here they are… 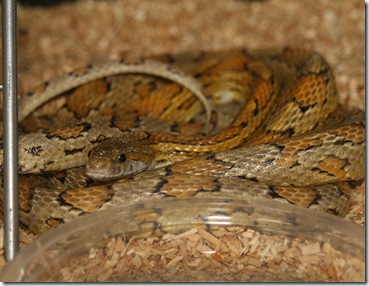 Here she is hanging out in her tank. The metal thing to the left of the picture is her jungle gym. She’s gotten so much use out of her gym, she loves to climb up it and hang out at the top of her tank.

In this picture you can get a good look at her mouth. When I first got her she had two sores right on the edge of her lips. I was a little concerned because mouth rot is something that can be harmful to snakes, but decided that since she was eating well I wasn’t going to borrow trouble. Well, as you can see in this picture, those sores are completely gone! Yay! 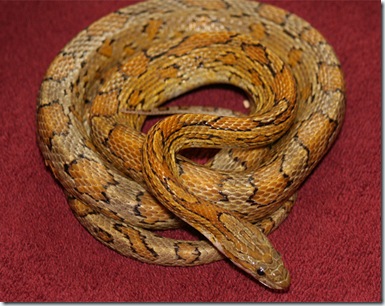 Here she is out of the tank and on a pretty background that shows off her colors.

I took a bunch of pictures of her and posted them on a corn snake forum to see if anyone could help me ID what kind of snake morph she is. The general agreement is that she’s a caramel or a normal het for caramel. I was surprised that no one even mentioned hybrid because that usually gets thrown into every ID thread on the forums. I think that after showing her around and getting a vast majority of "”caramel” ID’s that I’m pretty comfortable saying she’s a full blooded corn now, or at least has way more corn blood in her than rat snake.

Does it mean a lot to me if she’s a hybrid or not? No, not really… It’s just nice to know for the sake of knowing. 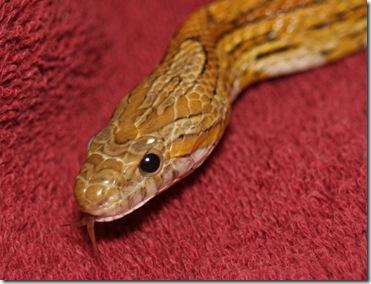 Here’s the last of them I have to share with you. A close up of her cute little face blowing a raspberry at me. :)

She really is a sweetheart… Kauket is still my girl, but Amaunet is the hands down favorite among the kids. They just adore her. She’s a lot of fun to play with and watch though, so I guess it’s no real surprise.

Speaking of Kauket, she’s currently in shed so we haven’t seen a lot of her. Kek shed a few days before Amaunet, and now it’s Kauket’s turn. It’s funny how they’re all shedding at about the same time now.

I have meals thawing for the two that have new skin, but I’m going to make Kauket wait until she feeds again. The problem isn’t so much that she’s in blue, but because she’s in blue she hasn’t gone to the bathroom, so her belly is still pretty full from the last feeding. I’ll feed her as soon as she sheds and takes care of business. :)

So there you go, pretty pictures of my new baby. You can comment now and tell me how much better she looks! lol

I’m in shock… Someone actually reads my blog!  lol

I had a request for an update on Amaunet, my snake rescue.  I was sitting here waiting for my kids to get out of school so that we can head down to Chicago and meet up with John and Tiana at Shriners.  I was thinking about blogging a whiny ‘poor me’ post because I have too much time to think on my hands right now, but blogging about the snake would be much better.

Amaunet is doing really well.  She’s been with us for about three weeks now, and shows no signs of any illness.  We’ll keep her in quarantine for about three months, just to be on the safe side, but so far all looks well.

Last week I weighed all of the snakes to check that they were being fed the correct amount and was shocked to see that my baby Kauket had reached the 200g mark.  That means she’s ready for small adult mice, and will be able to have babies soon.  Chad even asked if I wanted to breed her this year because she’s ready, but I decided I wanted to wait and do some research first so I would have a better handle on what I was doing.  Kek weighed in at 20g, which is exactly where he’s supposed to be, and Amaunet came in low (of course) at 190g.

Amaunet is a year older than Kauket and about nine inches longer, so she should be my heaviest snake.  She’s still catching up to healthy though.

Let me just state for the record here…  She eats like a fiend!  The first time I fed her she had a pitiful, weak strike; not anymore!  As soon as she scents the mouse she goes really still, and then quicker than you can blink she grabs it and starts munching down.  Not only that, she would stuff herself until she exploded if I let her.  Last night she had her first adult mouse in my care, and even though she was obviously quite full, she was still looking for more.  It’s hard to resist her liquid brown eyes staring up at me, but I’m a mean mommy and won’t risk her puking a mouse back up.  ICK!

She’s in blue right now (her eyes are clouded over and have a blue appearance), which means she’s going to shed in the next few days.  Once she does I’ll take some pictures of her in her shiny new skin and post them so you can see for yourself how she’s doing.  She’s still way too skinny, but she’s getting there.  I can’t wait until she fattens up and her outside matches her fantastic personality.

So there’s your update, and here’s a little video I sent to our parents of Jenna with Amaunet.  Jenna is completely in love with her, and they’re best friends now.  :D 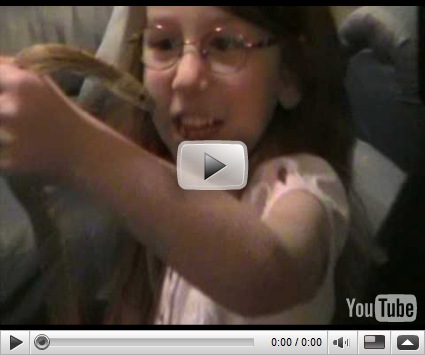 Posted by Anne 0 comments
Email ThisBlogThis!Share to TwitterShare to FacebookShare to Pinterest

And not just from the Disturbed concert we went to this weekend, though it was AWESOME!!!

It was freezing here on Friday, below freezing actually, –25F here in the tundra.  We knew parking was probably going to be an issue at the Rave, especially since not only was Disturbed playing in the Eagles Ballroom, but Red Jumpsuit Apparatus was also playing downstairs in the Rave.

We did manage to get a decent parking spot about a block away after getting stuck in traffic and driving around for awhile, but it was still too cold to go in without Jackets though we did try to brave the cold.

The concert was fantastic though, worth the very uncomfortable walk to get to the club.  Disturbed sure knows how to put on a good show.  John got me and the girls T-shirts and we all wore them out the next day when we went to get our nails done.

You guys all know how much I love my cold-blooded friends.  My snakes are my adopted children and I do everything I can to make sure their lives with me are quite comfortable.  I even got them these grid things for their tanks to use as jungle gyms so they can get some exercise.

Kek uses his to wedge himself in the seam of the tank lid to hide from me. 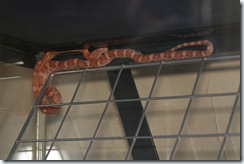 So a year and a half to two years ago a new reptile store went in just down the street from us.  We checked it out when it first opened, but never went back.  A few times we saw the owner when we were out and about.  We’d say “Hi” and chat a bit, then go on with our lives.  He seemed to be an OK guy, but was a touch flakey and liked to smoke an alternate form of tobacco if you get my meaning.  So not really the kind of person we’d choose to spend any time with.

On Friday when John came home from work he told me that he thought something was up at the store down the street.  He said there were three animal control cars there.  We gave each other a raised eyebrow, but didn’t think too much more about it because we were busy getting ready to head up to Milwaukee for the concert.

Well Alexi came home from a friend’s house today and told us that we HAD to read the paper.  The guy down the street got busted in a national news kind of way.

Here are a few excerpts from the local news article:

The owner of an exotic pet store was taken into custody Friday after city officials found dead, malnourished and illegal animals in his store.

“The conditions are filthy, disgusting, you can smell death walking into the building,” said Cindy Steinle, of Small Scale Reptile Rescue in Milwaukee, one of the agencies called in to help.

Police spokesman Sgt. Bernie Kupper said Friday afternoon they had recovered five to six alligators, a boa constrictor, a gaboon viper (which are illegal to be kept as pets), dead fish, iguanas and some geckos.

Many of the reptiles were emaciated and nearly all were dehydrated, Steinle said. Some were kept in Tupperware containers, Kupper said. Some were in the store and others were in the basement of the building, which officers said was about 40 degrees.

An alligator was housed with turtles with its mouth taped, Steinle said. One of the crocodile cages had no water and two dead crocodiles.

Here’s the full article if you’d like to read it: Pet store owner in custody after dead animals found.

I’m beyond upset to know that this was going on just down the street from me and I had no idea.  Not that I could have made any difference if I had known, but I could have at least gone down there and reamed him a new asshole.

It never ceases to amaze me how some people are utterly unconcerned about the ramifications of their actions on others.  Those poor animals… To be caged and then starved/neglected to death.  Thinking about their misery just makes me want to cry.

The surviving animals have gone to shelters and local rescue groups.  There they will do their best to try and give the poor creatures a chance at a better life.  All are malnourished, and many are sick with parasites and other illnesses.  At least they’re in the hands of people who will do the absolute best they can for them.

If you’d like to help out with the rescue efforts you can donate to Countryside Humane Society in Racine Wisconsin and/or Small Scale Reptile Rescue.  Also, if you’re looking for a great pet, consider adopting one from either of these wonderful organizations.  Mistreated, abused, and neglected animals are the ones who need your love most of all!

OK, off my soapbox now.  :)  One last note to let you know that Tiana is heading down to Shriners in Chicago tomorrow for another adjustment surgery.  If all goes as planned we should be home by Wednesday, but don’t be surprised if you don’t hear from me for a week or two.

As always, we’re so appreciative of all the good thoughts and prayers you’re sending our way for an incident free surgery, and quick recovery.  This would be so much harder for us if we didn’t have the outstanding love support of our friends and families!