I noticed today that this blog was looking really tired and worn out. I hadn't noticed before because I neglect my personal blog horribly... Poor thing.

So I spent some time giving it a fresh new look. I'm not so sure about the 4 column layout, but I've spent a ton of time messing around with it already today so I'm not changing it anymore. I'll either get used to it or it will bug me so much that I'll feel compelled to fix it in a month or two.

Provided I don't forget that I own this blog again. :D

If you check out the center column you'll find feeds to all of the blogs that are involved with Creative Dreams! If you're into digital scrapbooking AT ALL be sure to check them out! You'll find tons of freebies and information at those sites.

Since it's been so long since I've updated anything around here I thought I'd bore you to death fill you in on some stuff.

My new little snake baby is settling in quite nicely. He eats like a pig and spends most of his time hiding out in his tube, but he doesn't jump anymore when I stick my hand in the tank so I figure that's progress. 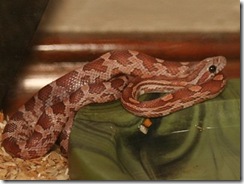 We named him Kek, fulfilling my personal requirement that all snakes in this house be named after Egyptian deities. Turns out that the goddess Kauket had a consort who's name was Kek. Since they're destined to be man and wife once he's old enough where he's no longer jail bait (or in Kauket's mind, food), I thought the name was fitting.

Speaking of, it's been a very long time since you've seen a picture of her (unless you're one of my Facebook friends), and I finally got some good ones of her a couple of weeks ago. 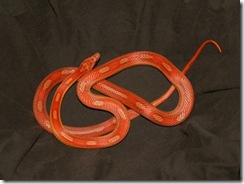 She now measures in over two feet long, and about as big around as two sharpie markers. She's a gorgeous girl and she knows it; she spends a lot of time posing as my necklace.

So, now for some non-snake related news...

I don't think I have any.

So anyway, if you'd like to check out some modern day pin-up girls, and also read about some of the great causes they're involved with, check out John's new site:

As for me... I've been putting a lot of time into my Digital Scrapbooking and working on Creative Dreams. If you haven't been there in awhile you should drop by! There are a lot of new things in the store, fun stuff happening in the forum, and goodies on my blog. That's the business blog where I don't talk about snakes or half naked women. :D

Until next time, when I once again I remember I have a personal blog...